The environment is typical of the central-southern alpine arc, characterized by predominantly coniferous woods that cover the slopes of the mountains up to 1800 m of altitude. Above this level, the forests, which occupy a third of the Park’s surface, give way to alpine meadows and rocky vegetation that goes beyond 2500 m.

The protected area occupies a mountainous area of 620.50 square kilometers, located between 477 and 3558 m above sea level.

The environment is extremely varied and diversified: the flora includes forests of firs, beeches and larches and meadows dotted with flowers.

Pastures, streams, peat bogs and inaccessible cliffs are present at all altitudes. At higher altitudes the landscapes are spectacular and unique, dominated by the marked geological and geo-morphological diversity of the two mountain massifs: the Brenta Dolomites (World UNESCO Heritage)  and the Adamello / Presanella Group. 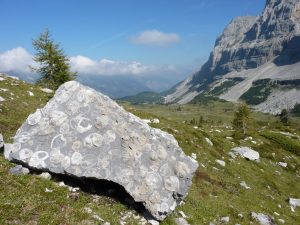 Traveling along Val Rendena you cross a border that separates the two Groups. Both were modeled by surface waters and glaciers starting around 20 million years ago, when the Southern Alps emerged from the sea.

Numerous side valleys are the gateway to the wildest and most remote areas of the territory where you can see the numerous species of fauna.

The geology is so unique that the Park has been recognized as a Geopark thanks to its 61 geosites.