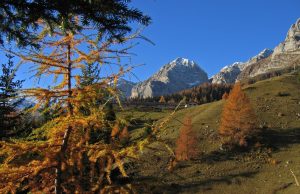 In the Adamello Brenta Nature Park autumn is a real show. Come and find out!

After the summer, a new special season begins to discover the magic of the Park.
In autumn, nature changes and so do colours, scents and light. The sun gets mild, the sky takes on a colour that you can only see in this period, and above all you can admire the splendid show of the foliage, with thousand colours of the trees in the wood.

Even the animals are preparing for the long winter season, and for some of them, like the deer, comes the rut, the mating season, in which they will test their strength. When the days get shorter, in the evening, the deer sing, like a natural orchestra, their love song: the roar.

Between mid-September and mid-October, adult male deer leave their usual solitary life. The mating season has arrived. The males are transformed, their necks grow larger and the vocal cords thicken to make the roaring echo for miles and miles. Only those who have the most powerful, vigorous and frequent verse will succeed in defeating rival males and attracting females.

To listen to the roar of the deer, at night in the woods, the Adamello Brenta Nature Park offers 3 excursions in the splendid Val Brenta. amphitheater.

The program includes the evening excursion with a dinner to talk about fauna and a walk in the woods, with the thermo camera, to observe this wonderful animal even at night, without disturbing it.

The proposal is part of the program “The deer roar in autum by Ambiente Trentino”. 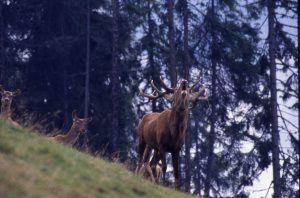